The Dangers of Driving in Asia

When it comes to safety, here’s why the car you drive makes all the difference in the world.

Asian countries account for more than half of the top 10 most congested cities worldwide, with Manila in the Philippines topping the list at a 71% congestion level. Traffic congestion doesn’t just result in a decrease in fuel efficiency but also an increase in blood pressure. It can also lead to risky lane-changing behavior and driver inattention — and that means a greater probability of accidents, especially rear-end collisions that often involve multiple vehicles. And while it may be impossible to remove the psychological effects of chronic traffic congestion, Subaru has come up with a number of ways to avoid the likelihood of accidents, or at least reduce their impact.

Sitting for long periods of time in heavy traffic often leads to aggressive driving. Pouncing on the accelerator and trying to squeeze into a line of cars that’s suddenly moving can be dangerous, especially if the car in front of you suddenly stops just as you’re gaining speed. In less than the blink of an eye, Subaru EyeSight’s Pre-Collision Braking system will intervene, by determining how quickly you’re approaching the object detected in front of you (a car or pedestrian) and, in a series of progressive stages, deciding how much to engage the anti-lock brakes to help you handle the situation safely. Subaru EyeSight’s Pre-Collision Braking system will give the driver time to react and avoid a collision or reduce its impact.

Stop-and-go traffic also means repeatedly switching back and forth between the brake and accelerator pedals, which can sometimes cause drivers to hit both pedals at the same time. Should this occur, Subaru’s Brake Override System (BOS) will help the driver navigate safely out of the situation, initially slowing the car by prioritizing the brakes. The system will then assess the driver's reaction to determine how quickly to decelerate the car further, or to allow the driver to reengage the accelerator and begin to increase speed.

Weather plays a big role in safety too, especially in Southeast Asia where monsoons are a part of life. Average annual rainfall in the Philippines, for example, can exceed four meters, according to the Philippine Atmospheric, Geophysical and Astronomical Services Administration. Couple this with imperfect road conditions (in 2014, over 155,000 kilometers of Filipino roads were unpaved, notes The World Factbook) and you can see why your average car needs serious help to stay on the road. Subaru designs its cars to deal with these extremes as part of everyday driving, starting with a high ground clearance, excellent wading capability and Subaru’s Symmetrical All-Wheel Drive (SAWD) system. Unlike typical All-Wheel Drive systems that run in 2WD mode most of the time, only activating when the traction of the two front wheels is lost, Subaru’s SAWD system is always on, continuously distributing engine power to all four wheels for maximum control.

Asian countries account for more than half of the top 10 most congested cities worldwide.

As the Pew Research Center notes, over 80% of households in Thailand, Malaysia and Vietnam own a motorcycle, which in most areas is the primary form of transportation. But roads swarming with motorcycles engaged in dangerous riding behavior can have terrible consequences. In Thailand, says the World Health Organization, motorcyclists make up 70% of road fatalities, while in the United States the figure is less than 25%. 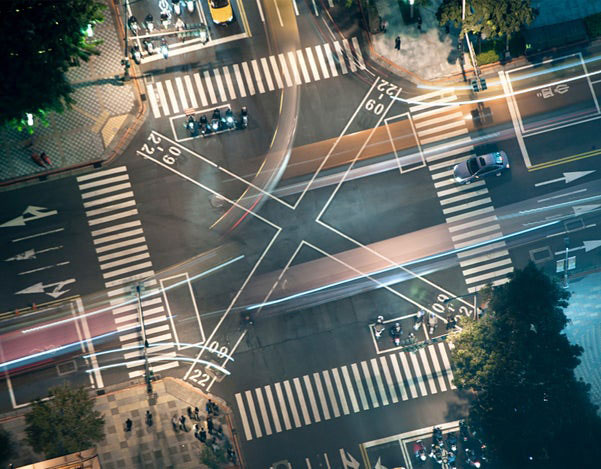 Accidents between four-wheeled and two-wheeled vehicles are often caused by a lack of visibility. Most of us know what it’s like to have a motorbike suddenly pop out of our blind spot and swerve around us. Subaru’s Blind Spot Detection system (part of Subaru Rear Vehicle Detection) aims to bring these ‘invisible’ vehicles into view, with sensors in the rear bodywork that detect objects you can’t see. By flashing a light in the relevant side-mirror cap to alert you when a motorcycle or other vehicle is in your blind spot, or too close while changing lanes, Subaru’s Blind Spot Detection system offers a clearer picture of the road around you, making things safer for everyone.

Whether it’s the roads, the weather, the motorbikes or aggressive drivers, driving in Southeast Asia can be challenging. Fortunately, choosing the right car doesn’t have to be.

PREV01 The Psychology of Road Safety: Your Brain Behind the Wheel NEXT03 3 Key Lessons to Teach Your Child as They Learn to Drive